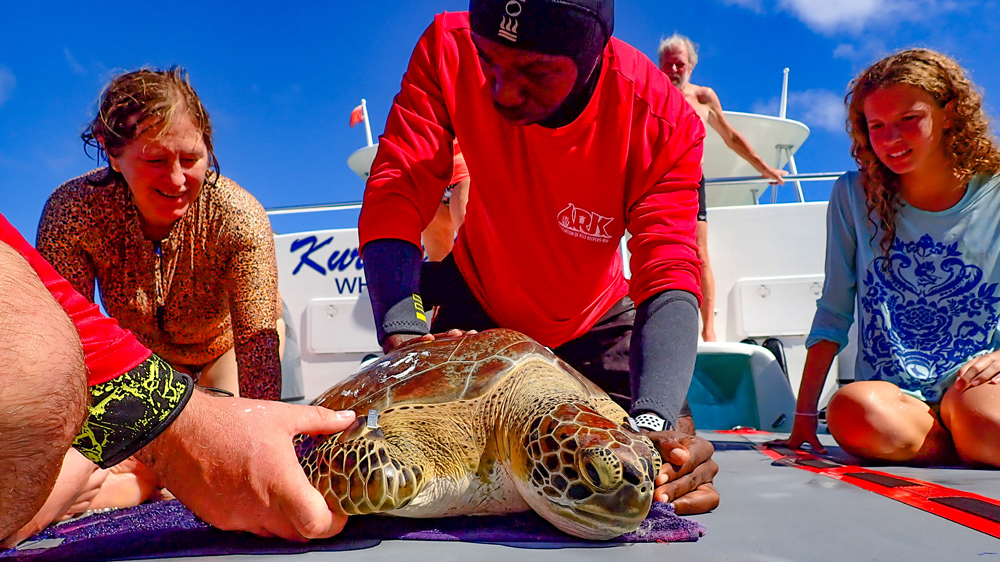 For centuries, the Japanese artisans have used hawksbill turtle shells to make a variety of trinkets such as eyewear, combs and cigar boxes. By the 1800’s, a fad had spread to the America’s and Europe to obtain hawksbill shells and green turtle soup had become a delicacy around the world. It wasn’t until the late 1970s when the Convention on International Trade in Endangered Species of Wild Fauna and Flora (CITES), the body that regulates cross-border trade in wildlife banned the international commercial trade of sea turtles and in 1978, the United States banned the intentional killing of all sea turtles under the Endangered Species Act. 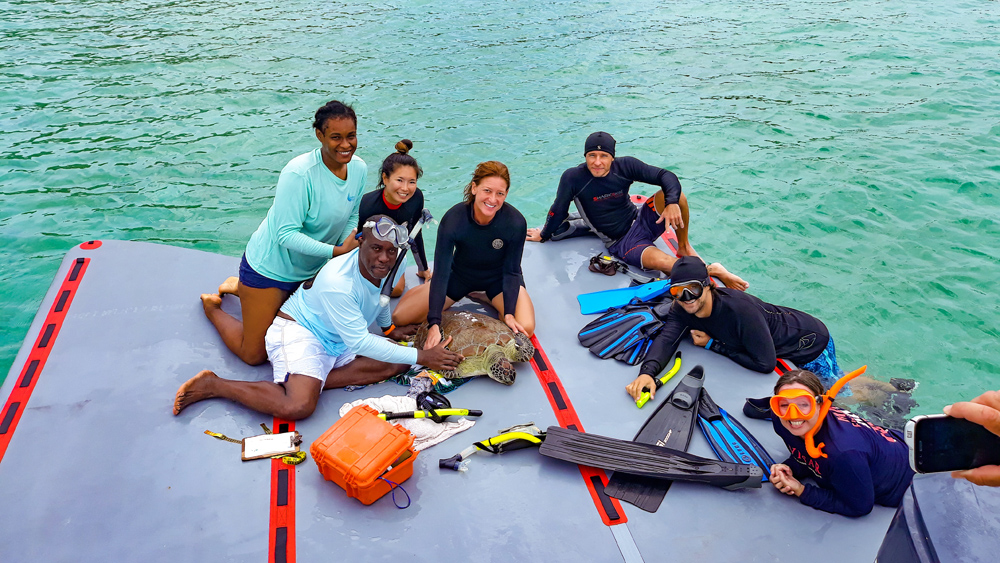 However, In the late 1990s and early 2000s, Japan tried to lift restrictions under CITES to reopen the trade of hawksbill turtle shells with Cuba. Because sea turtles are a regionally shared resource due to their highly migratory range over an individual’s lifetime, many Caribbean countries became concerned that Japan and Cuba’s proposal would undermine some of the long-standing conservation efforts that had already been implemented. This prompted the United Kingdom to launch the Turtles of the UK Overseas Territories (TCOT) project in 2001 to address critical gaps in the knowledge of marine turtle populations found in all their Caribbean territories (Anguilla, Bermuda, British Virgin Islands, Cayman, Montserrat and Turks & Caicos Islands).

Although the BVI was already monitoring nesting leatherback sea turtles, this 3-year UK-funded project brought a new dimension to turtle monitoring to the BVI and other UK Territories. In-water turtle tagging of foraging populations commenced which identified healthy populations of juvenile to sub-adult (teenage) green and hawksbill turtles in the BVI. Through genetic sampling of those turtles tagged, green turtles were identified as coming from as far away as Ascension Island, Venezuela and Costa Rica with hawksbills coming from Brazil, Barbados, and Cuba. Subsequently, some of the tagged turtles have migrated from the BVI on to their adult foraging grounds and travelled as far as Nicaragua, Bonaire and Guadeloupe. 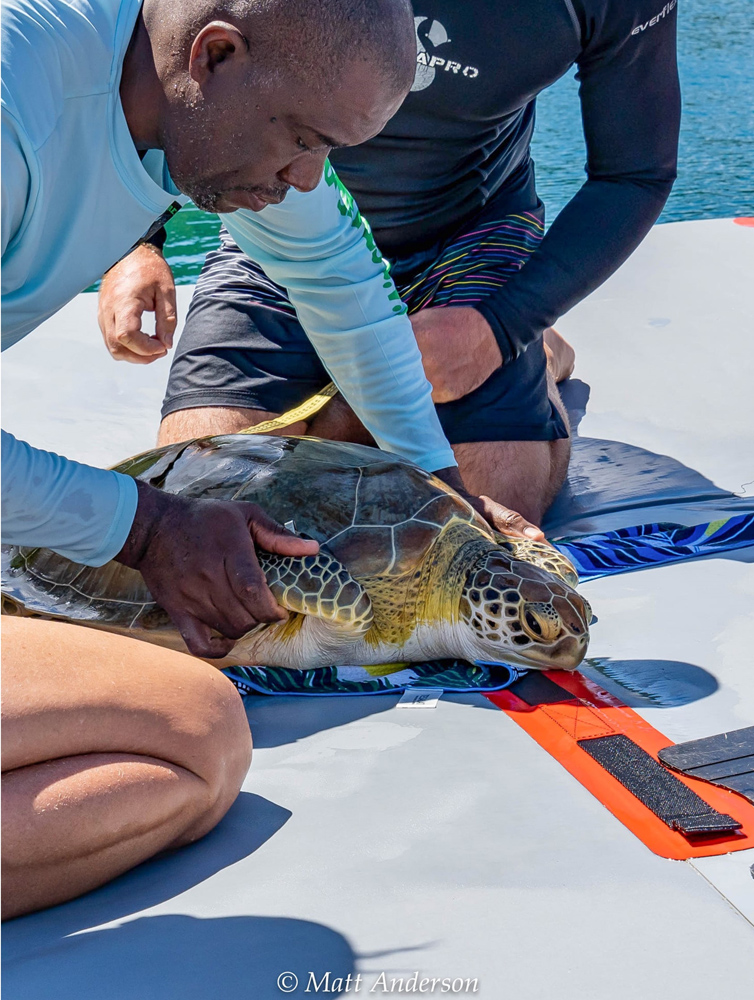 Although the TCOT project ended many years ago, in-water turtle tagging of foraging populations continued over the years. Now, with an extensive baseline of information and a growing need for changes in local sea turtle management, the BVI was awarded a Darwin Plus grant worth over US$300k from the UK’s Overseas Territories Environment & Climate Fund in June 2020. This newly implemented STEEL Project (Sustainable turtles, environments, economies & livelihoods) is aimed to ramp up tagging efforts to better understand changes in the status of BVI turtles based on nearly 20 years of data collected. Additionally, foraging turtle habitats will be assessed on how to build resiliency in areas that were impacted by the 2017 hurricane events. An educational programme to provide the community with a better local understanding of turtle conservation will be implemented and, using the MCS Community Voice Method (CVM) of engagement, the project will engage BVI communities to develop new legislation recommendations and a conservation action plan to safeguard BVI’s turtle populations for future generations. 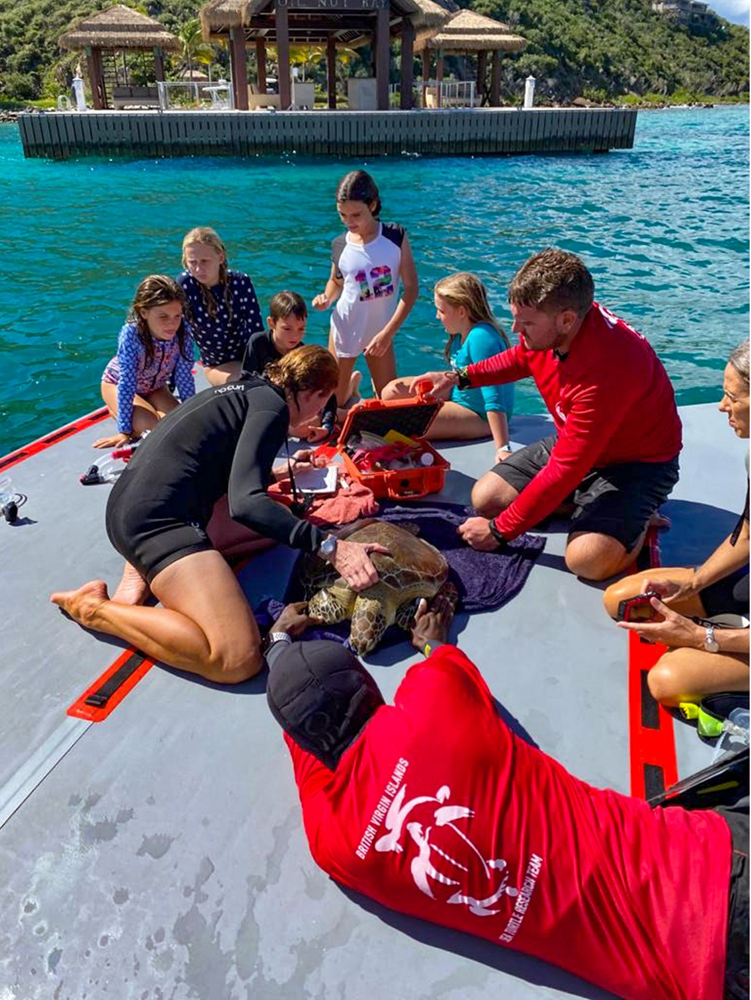 The STEEL Project is being led by the Marine Conservation Society UK alongside local organisation, the Association of Reef Keepers (ARK) and partnerships with the BVI Government’s Department of Agriculture and Fisheries and the Ministry of Natural Resources, Labour and Immigration. Additionally, local dive and tour operators such as Sail Caribbean Divers are participating in the project by providing boats and assisting local turtle scientists in capturing, tagging and releasing of sea turtles.

A Grand Day Out in Grand Turk 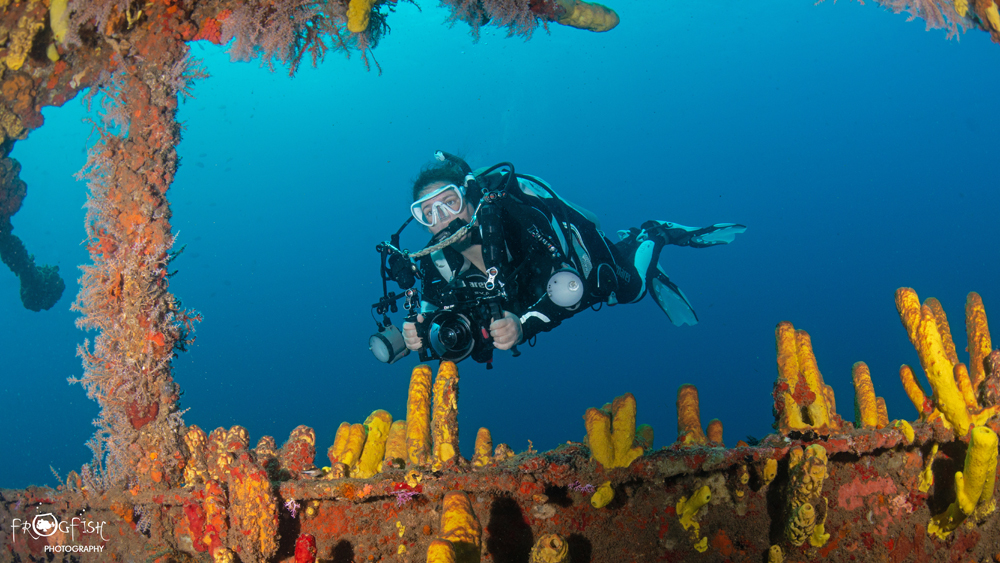 Our final day of diving saw us heading south again to the wreck of the Lesleen M. The wreck was sunk as an artificial reef in 1986. It sits upright in the water just off Anse Cochon in about 20m of water at its deepest point. AS it has been in the water for over 3 decades, it is now covered in marine life. Yellow and purple sponges rise up from the deck and off railings. Gorgonian corals created huge curtains across the walkways and on the bow and stern. The prop is covered in orange sponges and cup corals. Barracuda and porcupinefish cruise the middle section of the boat. Schools of reef fish live in the covered section of the stern. There is life everywhere you look. To make the most of this dive, bring a light, as the colours are incredible. 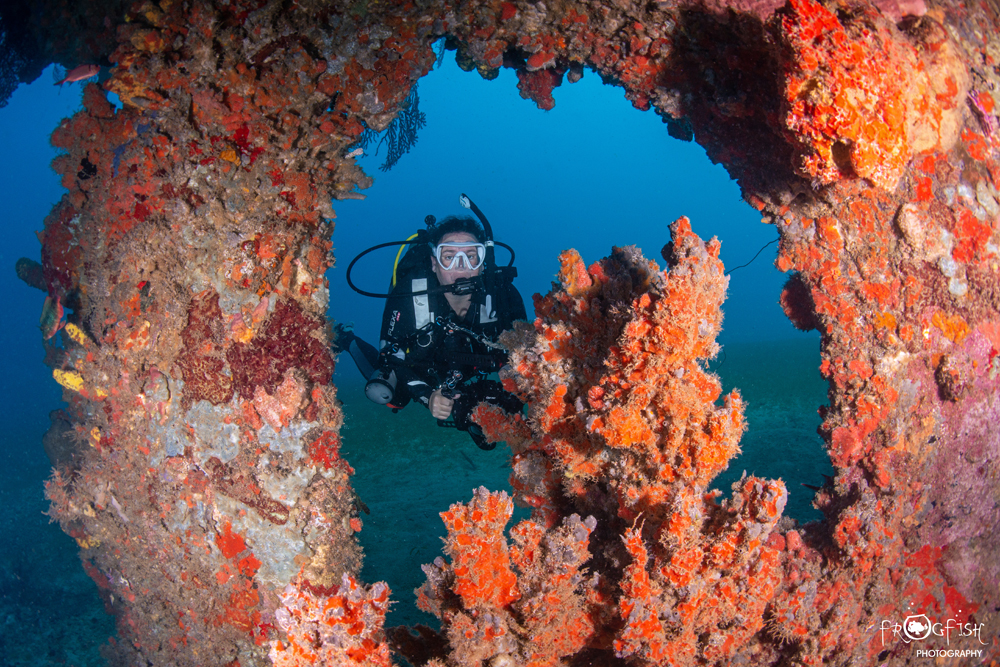 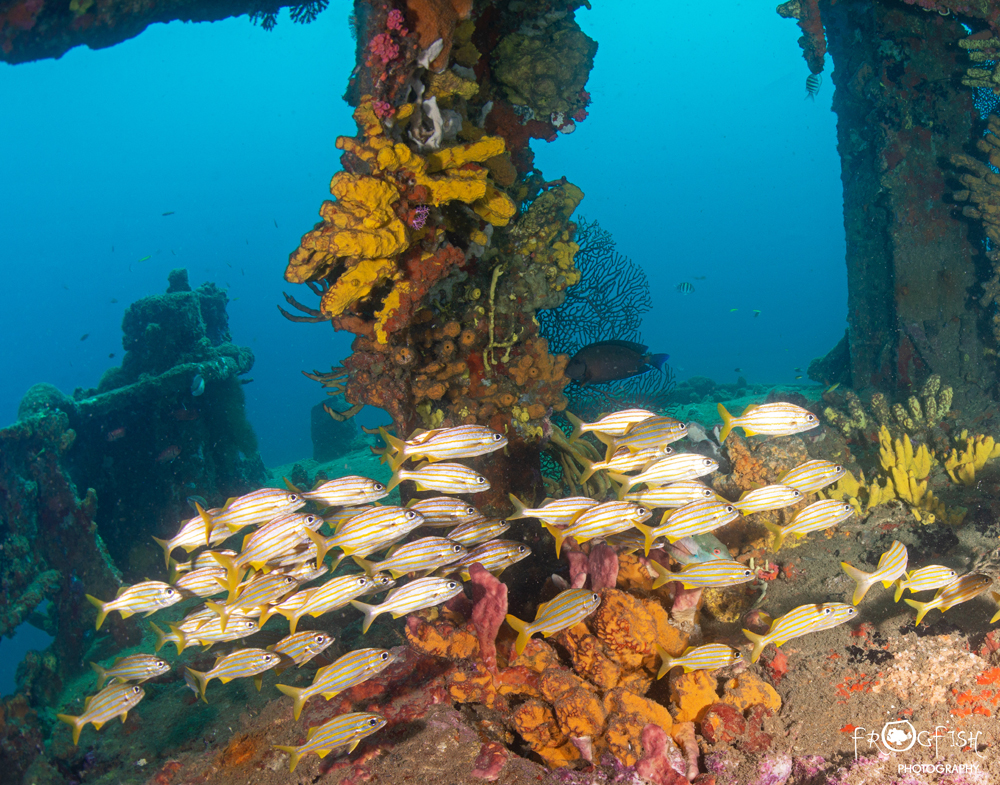 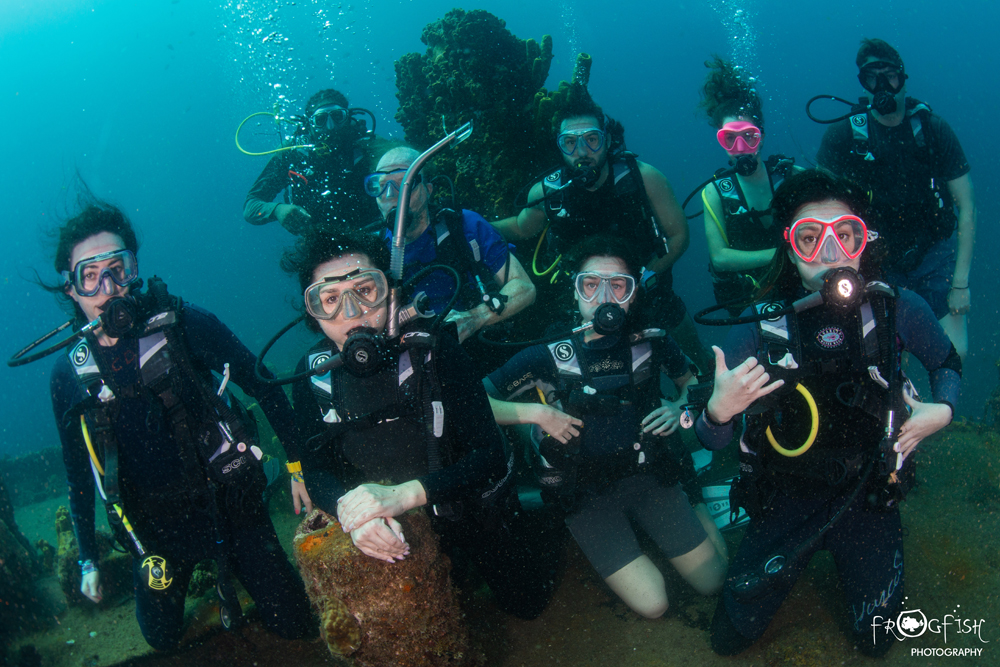 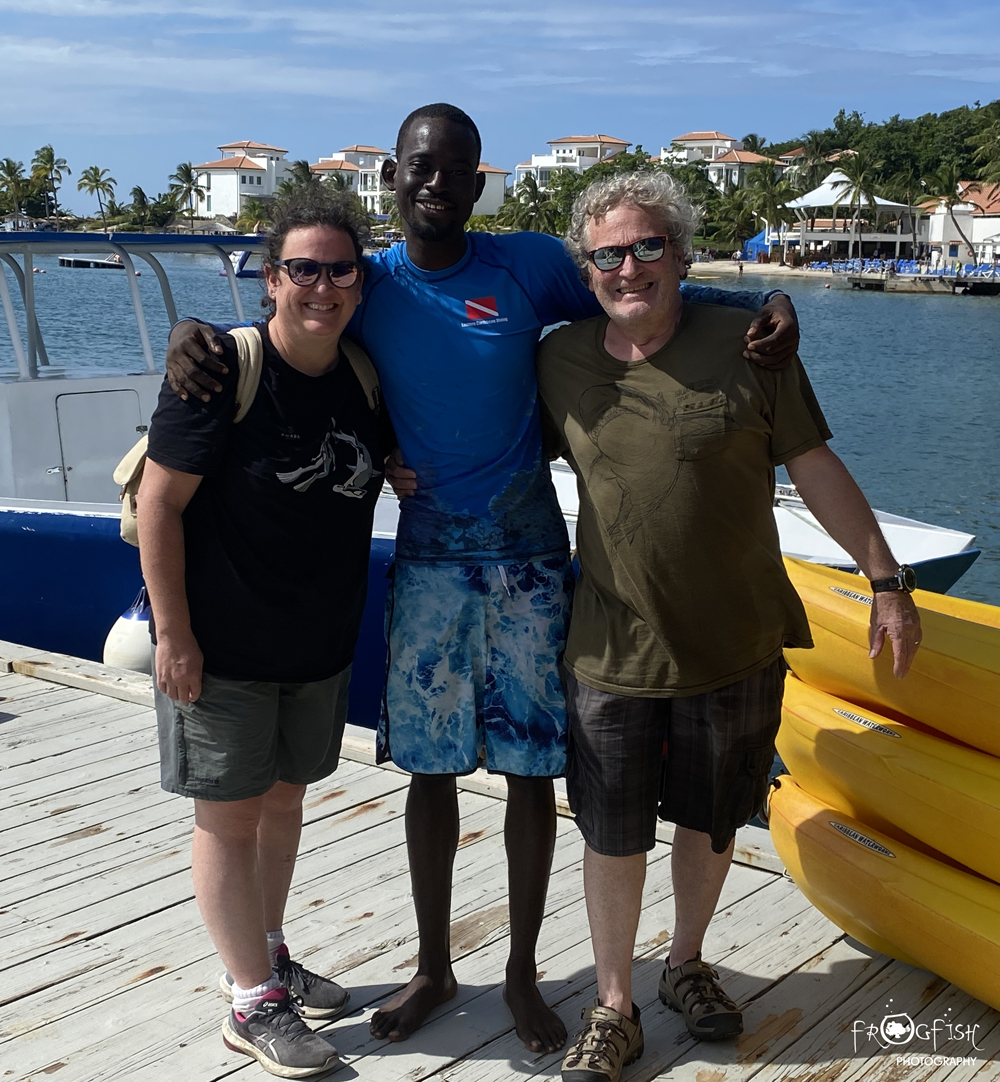 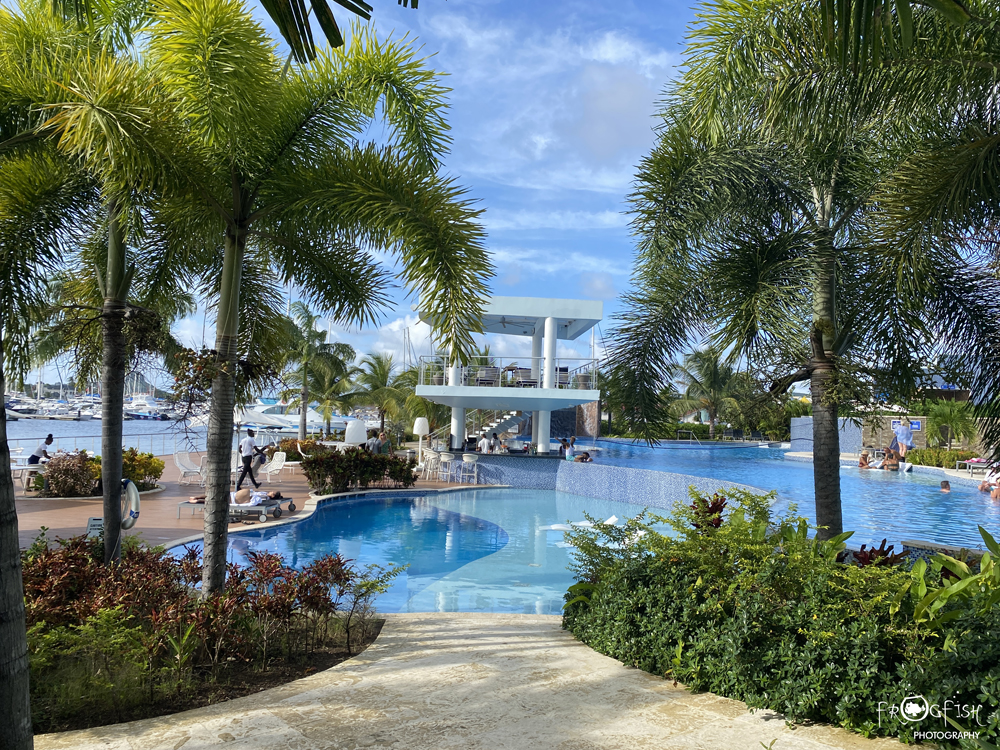 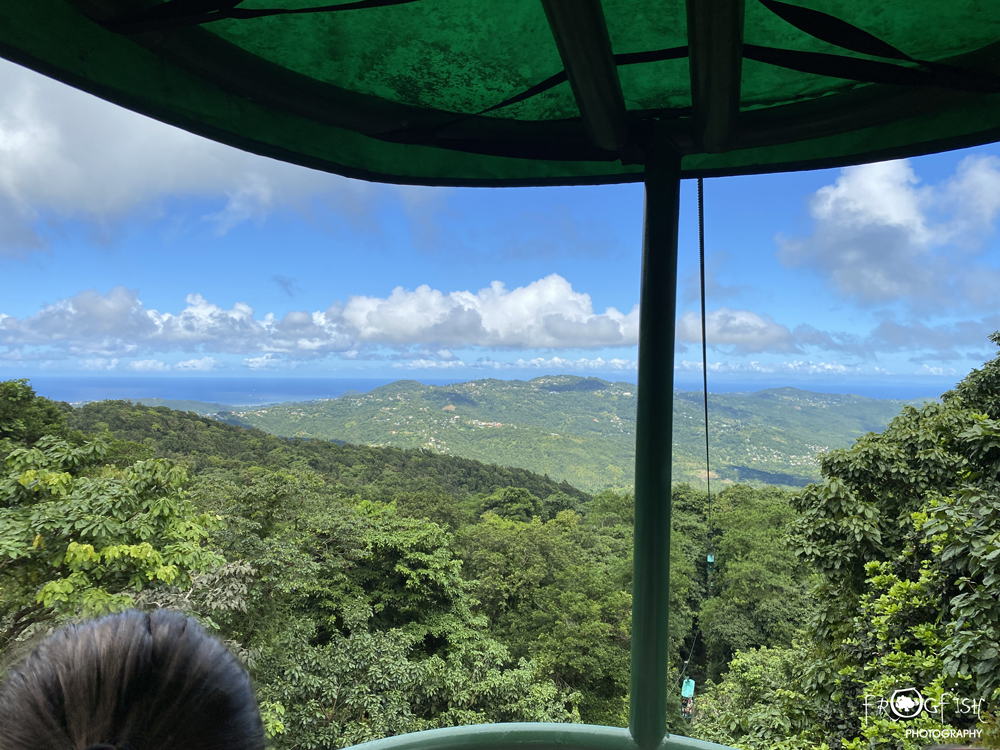 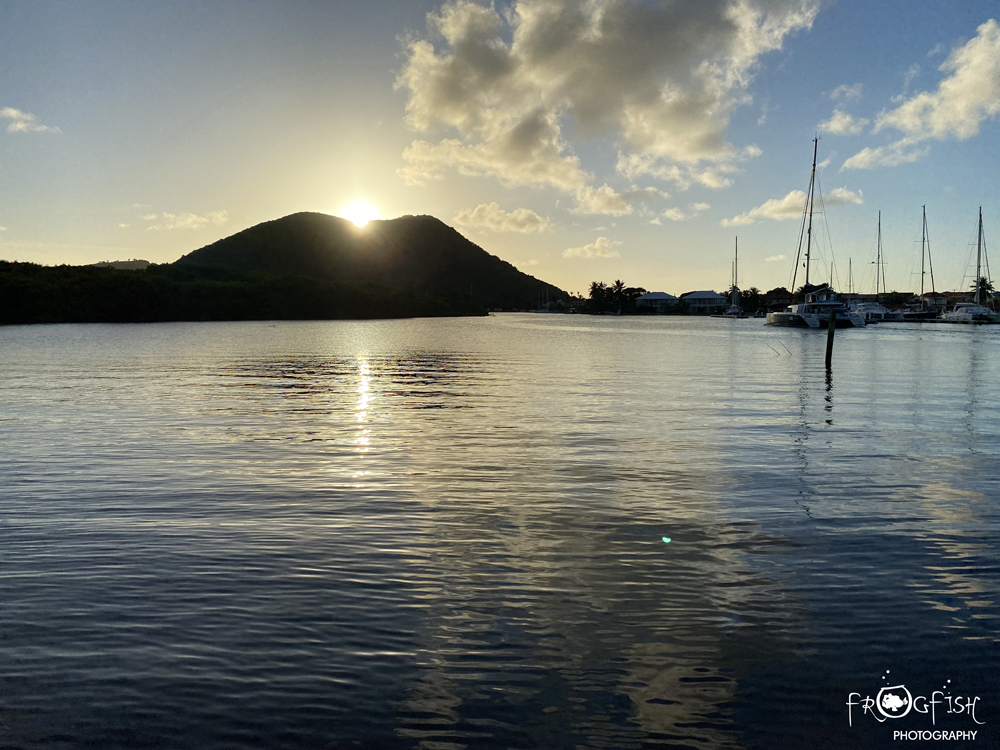 We were lucky to have been able to dive the wreck as a buddy pair, without any other groups. But we loved the dive so much we asked if we could join the group for another dive on the wreck as our final dive of the trip. However, the group we were going to dive with were a little bit special! Two of the group had got married the day before. Nine of the family (mum, dad, the happy couple, sisters, brothers, and their partners) who had come to Saint Lucia for the wedding were on our boat. We offered to take an underwater photo of them. Getting the shot was not as easy as we had first thought though! Getting them all still, in the same place, not blowing bubbles at inappropriate times turned out to be a challenge! It was, however, a joyous way to finish off our diving on Saint Lucia.

Our final day saw us heading to new heights, via a cable car experience into the rainforest canopy. Not only does this trip offer stunning views over the island, but our guide was so knowledgeable we also learned plenty about the local fauna and flora of the island. This is the perfect activity for the non-diving day at the end of a trip. A final cocktail in the beautiful setting of the Harbor Club as the sun set saw us reflect on a super trip. We barely scratched the surface of what Saint Lucia has to offer. Alas we never got to experience the diving in the north of the island, so we will have to return to rectify that. Hopefully sometime soon! 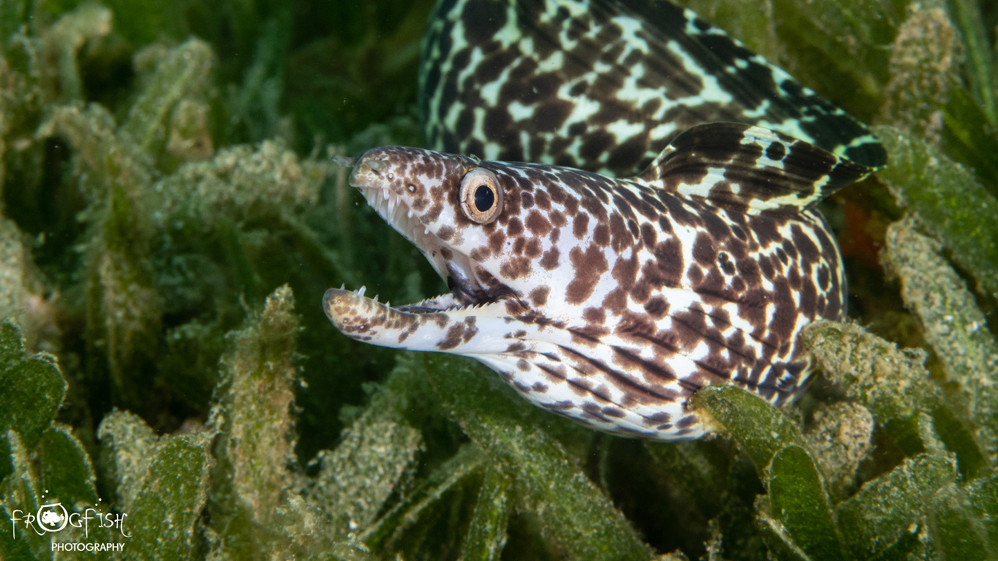 After our first two days of diving in the south of the island, below the magnificent Piton mountains, it was time for a day off. Usually we would pack in a much diving as possible on a short trip like this, we had been invited to speak at a local school. Our hotel, Bay Gardens Beach Hotel and Spa, already support the school with a breakfast club to ensure the kids start the day with a good meal. They asked us if we might go and speak about the ocean, marine life, conservation and our work. As the school did not have a room big enough to hold all the kids, we setup in the local church. The kids filed in and sat in rows of pews and we chatted about the marine life that can be found both in the waters surrounding Saint Lucia and further afield. They knowledge of shark species was incredible! They even identified a Basking Shark correctly! We were stunned when they presented us with a huge box of local fruits they had picked from their gardens as a thank you. Our driver then took us for a drive around the north of the island to show us some of the plentiful beauty spots. 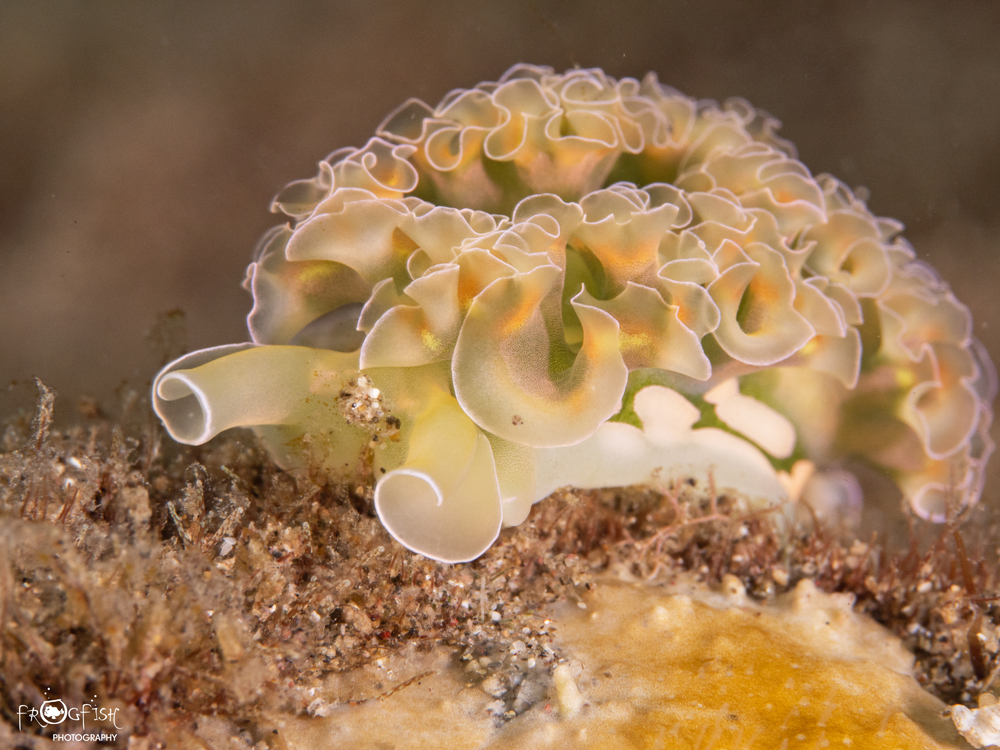 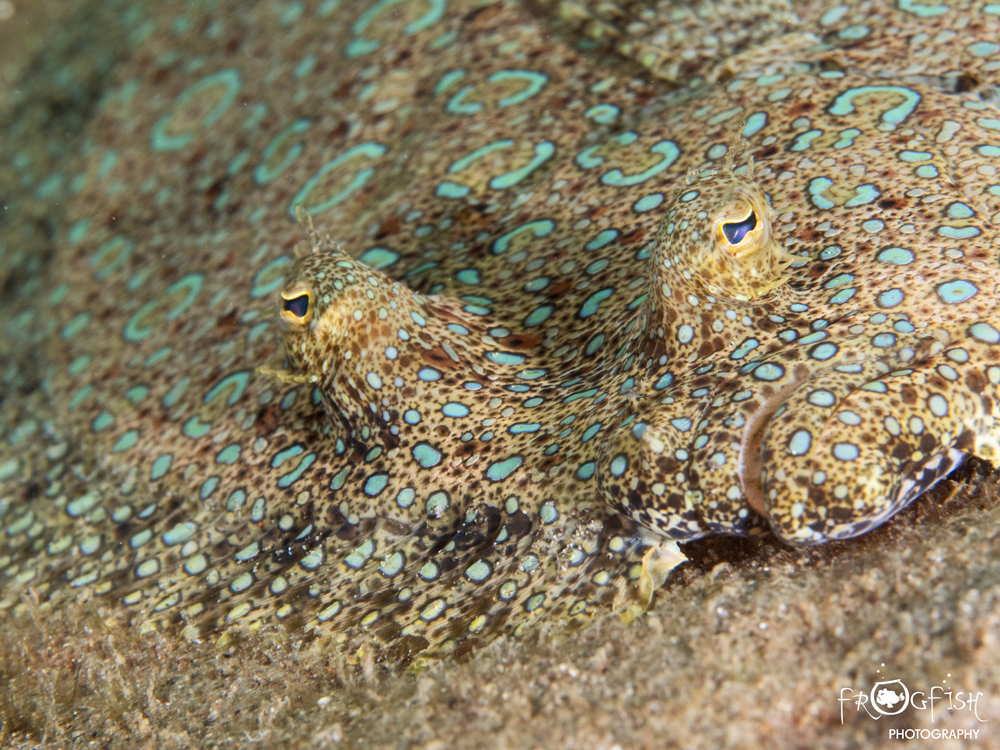 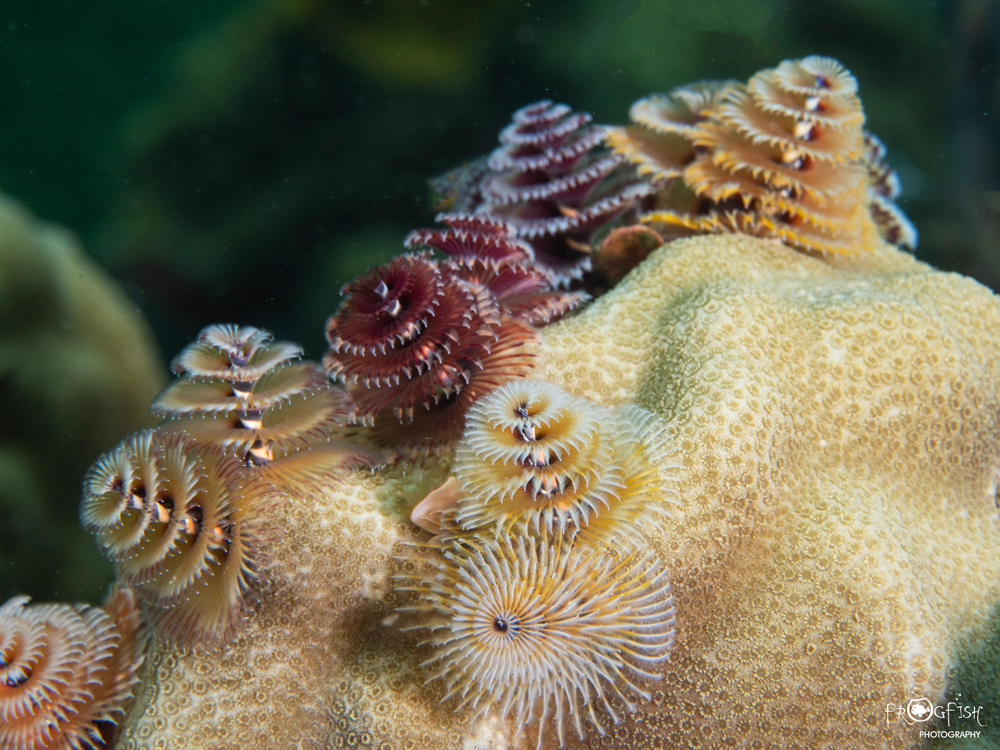 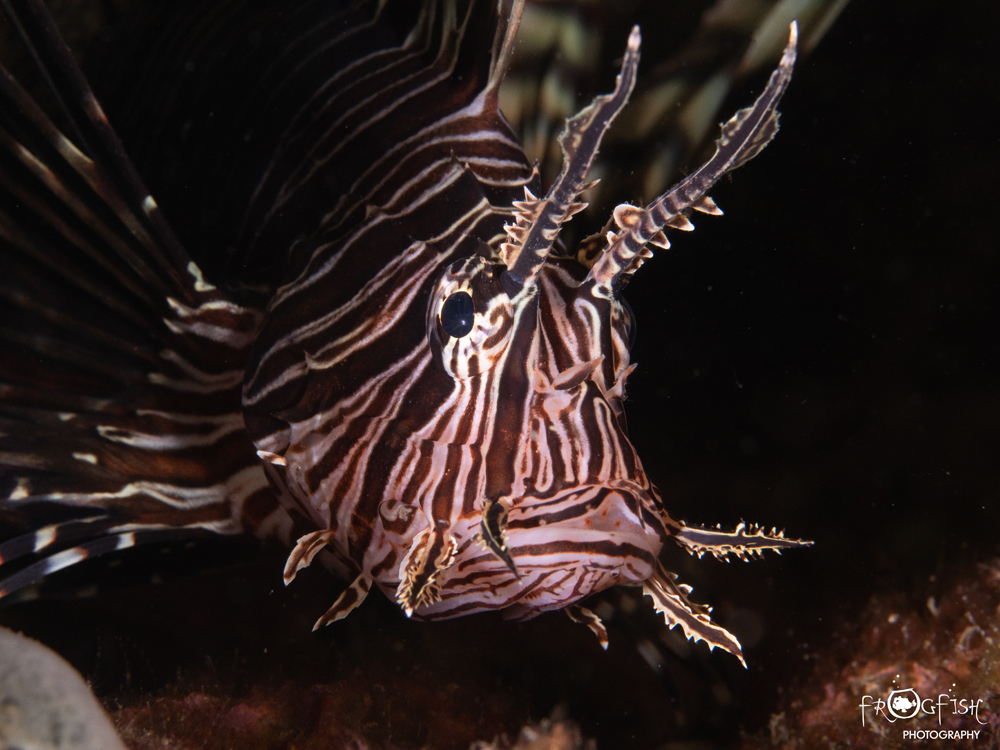 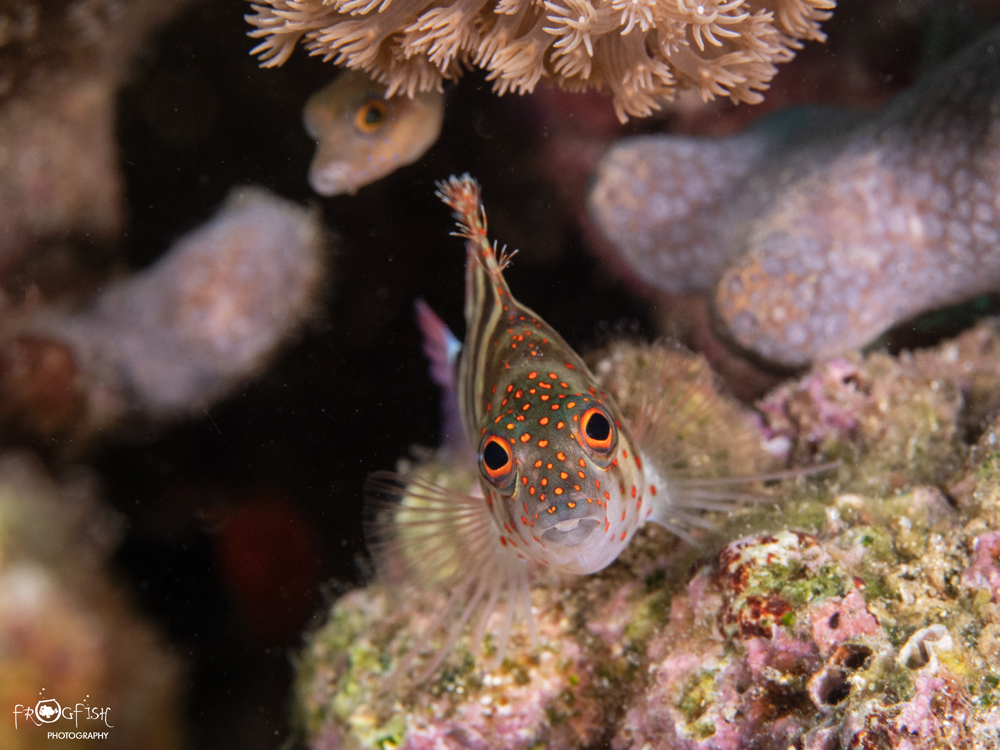 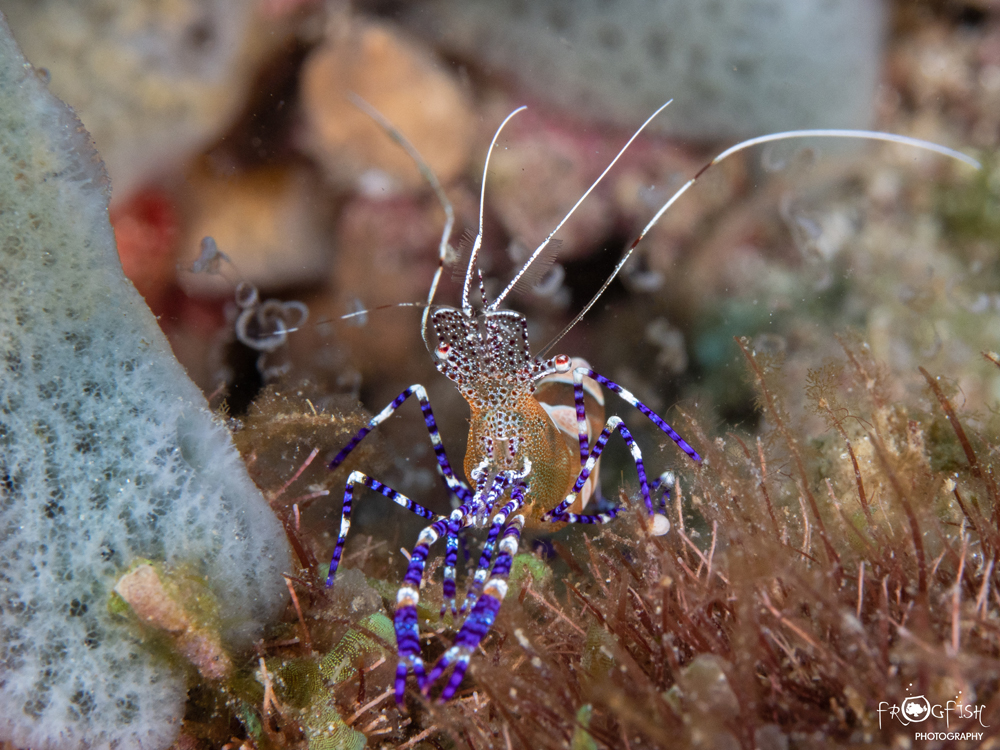 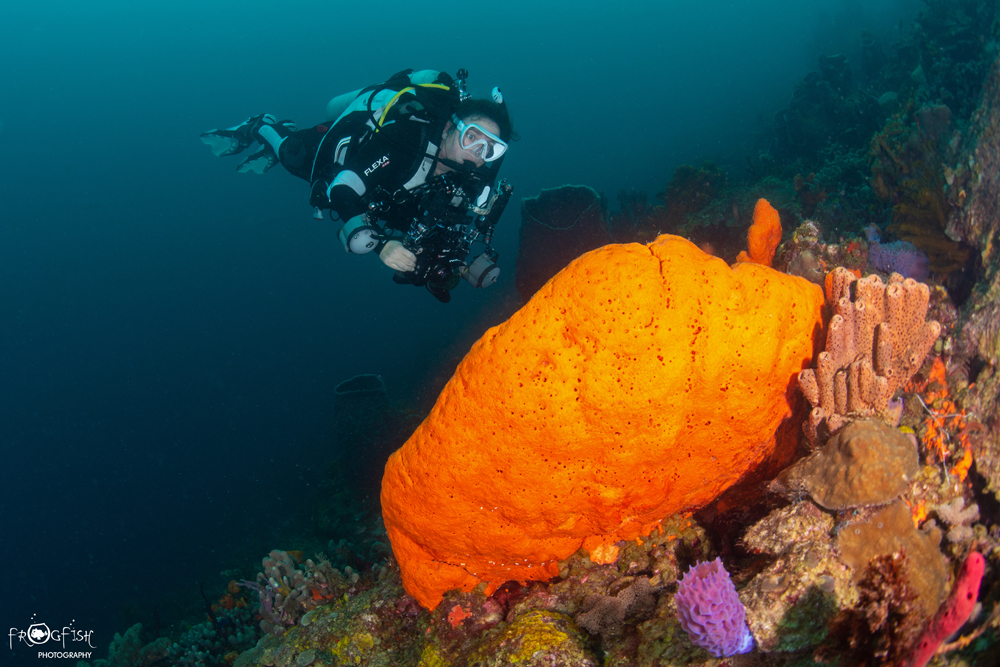 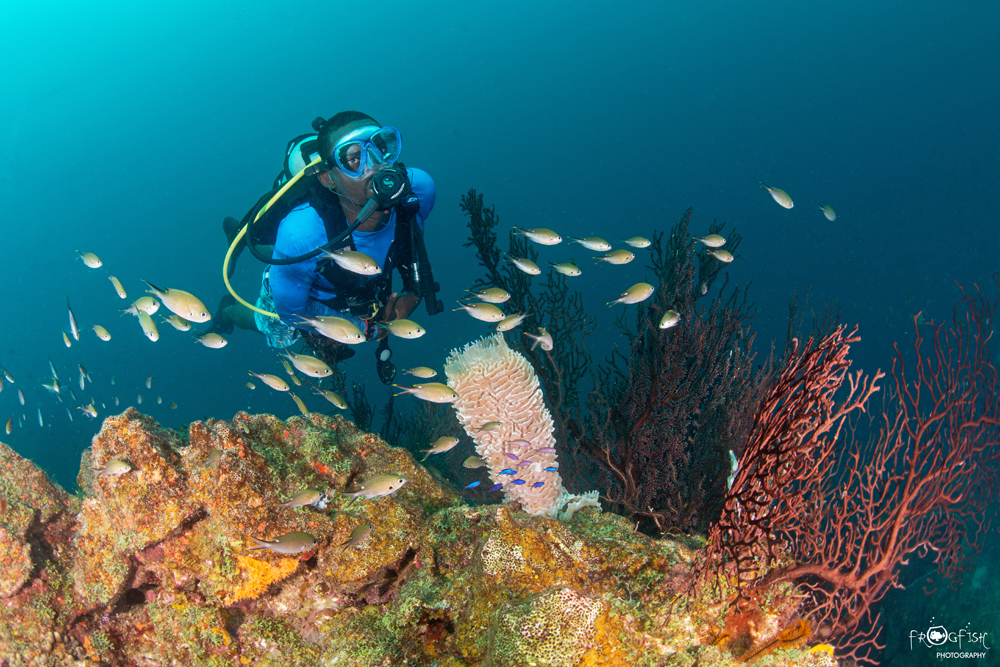 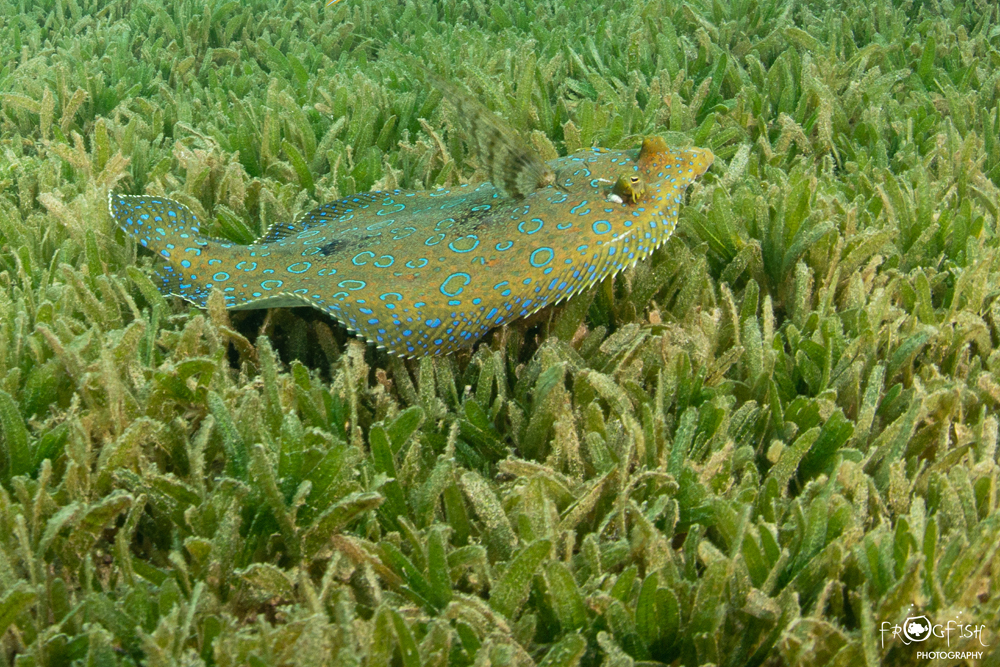 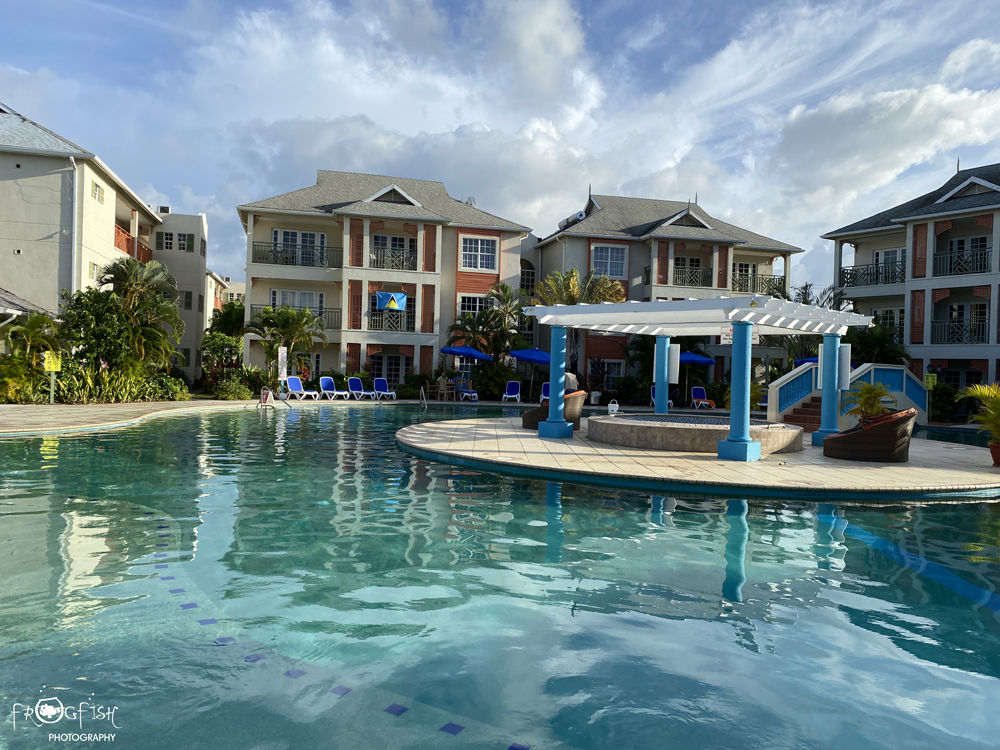 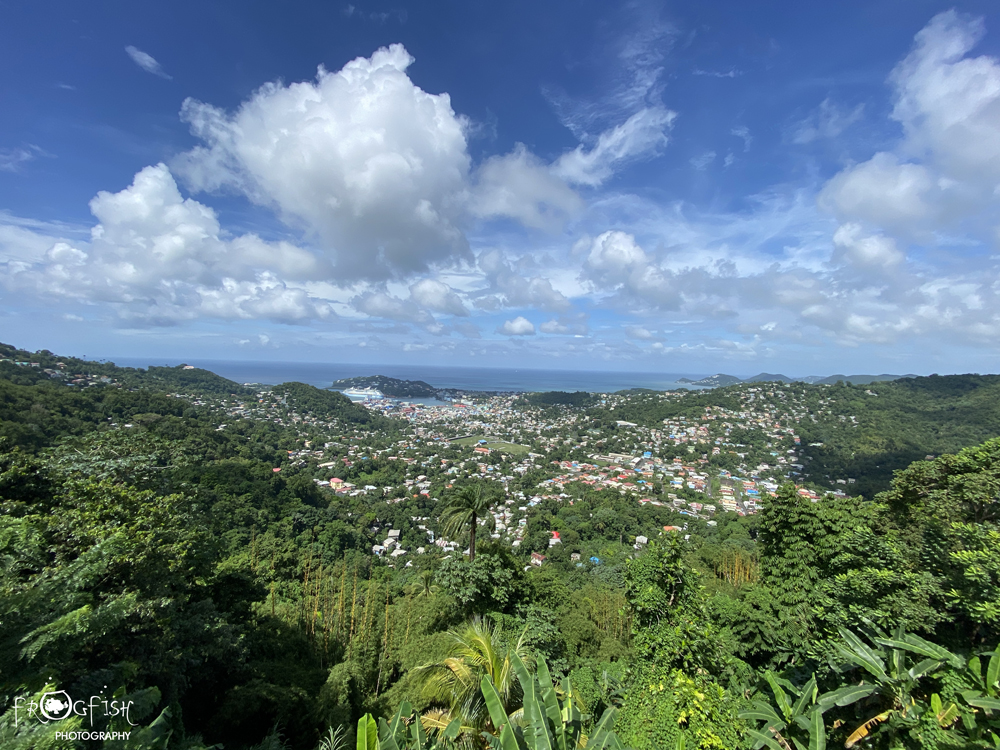 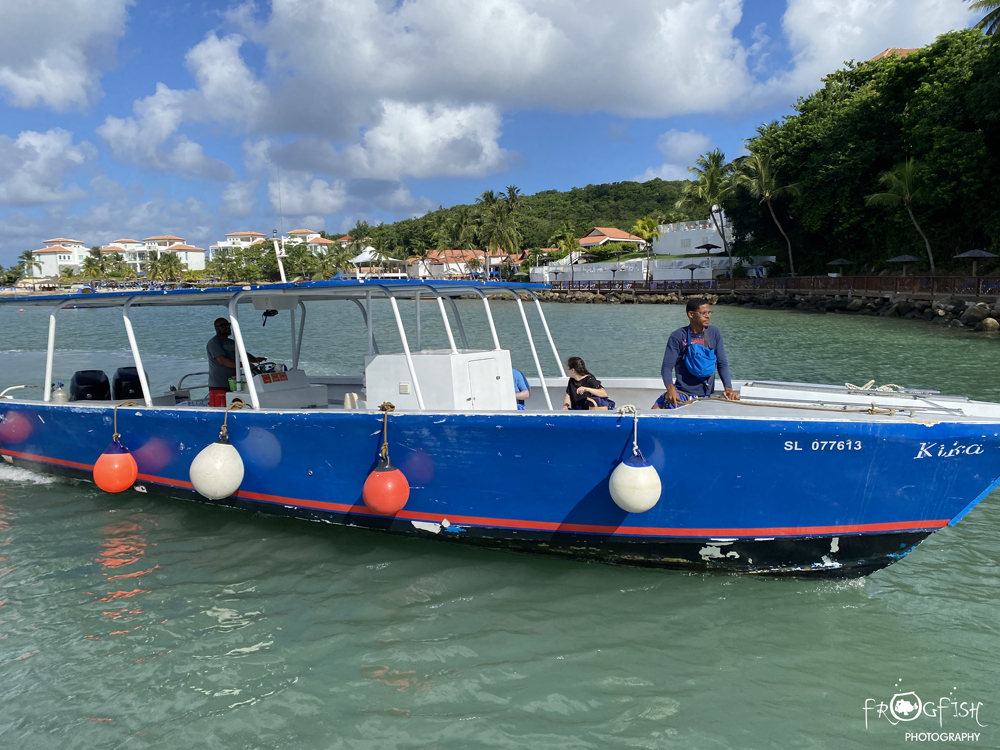 Back diving again, we still headed south, but to sample some different diving from our first two days. We were delighted to dive over a healthy seagrass bed that was home to a host of marine life. Snake eels skimmed along through the blades of grass, flounder lay camouflaged, and several species of crustacean could be found once you got your eye in. A huge Southern Stingray lay buried in the sand and our guide, Mervin, was delighted to find a seahorse (that did not want to be photographed). Dotted throughout the seagrass bed, coral bommies were a haven for small marine life critters. Eels and lobster hid in the crevices, while small juvenile fish darted through the coral and sponges.

Whilst we were on an all-inclusive basis at our hotels, we love to get out and about to try local establishments where we can. So each evening we would take a stroll to the waterfront to sample some excellent food and a local beer or cocktail, whilst watching the sun go down. The perfect way to finish off a great day of diving.

Lovin’ Saint Lucia: Diving in the Shadow of the Iconic Pitons (Part 1)